THE TALE OF THE GOVERNOR AND THE SENATOR

Today I am interrupting my usual commentary to tell you a fictional story about a governor and a senator. Sometimes inspiration just comes to me unannounced like power outages in Nigeria. Remember: all characters appearing in this work are fictitious. Any resemblance to real persons, living or dead, is purely coincidental.

Once upon a time, there was a senator with a receding hairline and an afro. But this senator was not always a senator.  And he wasn’t always going bald. Once upon a time, the senator was a young man with a respectable hairline. A full head of hair does something to young men; makes them boisterous and arrogant. So this senator – when he was a young man – joined a group of people who fought with the military government of the day and was sent to prison. Fortunately, although he was expected to spend a long time there, a new government took over and he got released. From that day onward he resolved to never miss an opportunity to talk about the terror he experienced in prison. He swore that even if someone said good morning to him, he would find a way of sneaking in the fact that he was once in prison, responding to the salutation with something like: “did you know that on some days in that terrible prison we did not know when it was morning or night?”
Somehow being an activist paid off, because eventually, in addition to his prison experiences he became able to chip in the fact that he has a house in London and Abuja.
Once upon a time, this activist got some money, ran for office as a revolutionary and won a seat in Nigeria’s senate (all the while refusing to trim his afro in spite of his receding hairline. That takes guts.)

Because he suffered so much in prison and was an activist and revolutionary, the senator decided that the first action of his, (to ensure that his time in politics was radically different from the past corrupt and wasteful set of politicians) would be to, literally, raise the “steaks”. How did he do this? He looked at the records of corrupt politicians before him and remembered that he had criticized some of them for giving handouts to people in the form of rams during Sallah and Christmas and he said to himself: I, Senator ex-Prisoner and Revolutionary will do a revolution. There will no more be rams. I will give the people horses! (Or maybe it was camels. I always get this part of the story mixed up. But it doesn’t matter.) He gave the poor people of his constituency an animal bigger than any corrupt politician had ever dreamt of. He was a great, visionary man to think of giving his poor constituents animals as big as horses. (Or was it camels?)

Once upon a time, while all of this was happening to the senator, there was a governor. This governor was not always a governor. He was once a Minister who tried to do his job, even though of course many of his friends and the people around him were corrupt. He too had a receding hairline but wasn’t presumptuous enough to grow an afro. Lack of confidence. He won elections in the same state as the senator but because of his wickedness, decided to begin work right away. No break. No room for business as usual. No allowing the poor people used to dysfunction enjoy the last bits of dysfunction. Wickedness! The senator hated this. He thought that he had set a good example for the governor to follow by giving the poor masses horse meat (or was it camel meat, I still can’t recall). He told the whole world that the governor hated the people by getting right into development and reforms instead of feeding them first.

And the senator was wise in saying this. Just as when you find a starving, sickly person at the point of death, you do not pump them with solid food immediately but slowly introduce liquids and light food, you do not begin governing a state by trying to change things, no matter how bad they are. Sometimes, all poor people need is the meat of an animal bigger than that of a ram.

This governor did even worse things. He stopped people from stealing government land and reduced waste by cutting his own salary and the number of appointees. He also tried to stop people from begging in the streets. The senator was so indignant (rightly), he spat onto the floor. What kind of governor stops people from encroaching on government land? Is democracy not a government of the people by the people and for the people? Does this not then mean that if you steal government land, it is not really stealing because you are the people and the people are the government? If you take a shirt from your own wardrobe, is it stealing? And really we all know how colorful a city can be with beggars singing praise songs at junctions and traffic lights. A city without its beggars is a poor city, without a soul. Where will people who need to do rituals that involve giving food to beggars find beggars if we drive them out? What if the beggars went on strike and refused to be part of the system through which prayers of God-fearing hustlers are answered? That would be a disaster! The senator knew all of this and so he proceeded to denounce the balding governor in public, calling him an enemy of the people. The senator was oh, so wise.

And one important fact is that while the governor wore glasses, the senator did not. Meaning that the senator could see better. Who knows, maybe the governor was blind. Blind to how development and change can actually hurt a state. Blind to the nutritional value of horse meat (or was it camels now, I forget). Blind to the fact that sometimes you must take a horse to the river and give it a straw to make life easier; that sometimes you do not teach a man to catch fish when he is hungry: you simply give him horse meat (or camel meat) which will last longer in his stomach than fish.

Some people lied about the senator saying he was already trying to replace the governor at the next elections and that was why he was upset. But the senator was not blind. All the senator wanted was to show the people the way, especially as his eyesight was better. And as someone who created these fictional characters, I can assure you the senator was not interested in becoming governor.

This my dear readers is the moral of the story: Camels and horses are better than rams, and nobody, really, likes real change when they can have horse or camel suya.

Thanks and God bless for listening.

PS. Forgive me, I am still working on deciding on whether to use horses or camels for the story. I’ll let you know.

PPS. In totally unrelated news, I thought to give you all (married people) some advice. I feel like every married person should take the time to study their wedding photos. (If you got pregnant and moved in together, that's ok. I'll address you some other time.) Wedding photos reveal a lot. One thing you get to see is those friends who attended the wedding but were not smiling as you were rejoicing. Those are the friends you should find and deal with, before they find a way of wrecking your marriage. Just saying. (I am sorry I could not find a more appropriate photo to illustrate this point. Below is the closest stock photo I could find.) 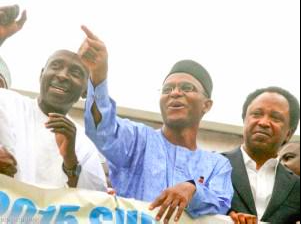 You fit vex, bet abeg no curse me. You hear?

Serving size: As many articles as possible. Allow time to digest before commenting. No daily limit. Read and share liberally.
AMOUNT PER SERVING || %DAILY VALUE
SATIRE: 100%
SARCASM: 100%
TRUTH: Trace. Daily value not established.
HUMOR: Your happiness is up to you. Leave me out of it.
IRREVERENCE: 100%
POLITICAL CORRECTNESS: 0%
Apart from sea food, and occasionally fish, no animals are harmed in the preparation of this blog.
In case of accidental overdose, tell a friend to visit this blog.
And, ehen, BUY MY NOVEL...

Lies I tell about myself

Elnathan is a writer and lawyer living in Nigeria. His works have appeared in Hazlitt, Per Contra, Evergreen Review, FT and the Caine Prize for African Writing anthology 2013&2014. He writes weekly for Sunday Trust(and any other publication that PAYS him). Except you are The New Yorker, he considers it violence of unimaginable proportions to ask him to write for free. He has never won anything. This record was almost disrupted by the Caine Prize when they accidentally allowed his story on the shortlist in 2013 and in 2015. Of course, both times, he did not win. In 2008, after being lied to by friends and admirers about the quality of his work, he hastily self-published an embarrassing collection of short stories which has thankfully gone out of print. He hopes to never repeat that foolish mistake. His novel Born on a Tuesday is out in Nigeria and will in the UK (April 2016) the US (May 2016), and Germany (in German 2017) and he hopes that apart from his 5 friends, others will buy the book. However, nobody seems to want to publish his collection of short stories. This puzzles him. He really loves those stories.
Elnathan is touchy about his skin and man boobs and isn't bold enough to grow hair. One of his new goals is getting to a weight below his current 100+kg and losing his fast growing beer belly.

Wetin I don write before. Check am